PLEASE, PARDON THE DUST BUT WE ARE REBUILDING THIS PAGE. SORRY FOR THE INCONVENIENCE.

• A teaser preview of “Waiting for Lightning”, a documentary on the life of professional skateboarder Danny Way, directed by Jacob Rosenberg.

• U.S. premiere of “Format Perspective”, a documentary chronicling the lives of six European skate photographers in front of and behind the lens, directed by Philip Evans

Stacy Peralta was honored by the Academy of Skateboard Filmmakers Arts & Science for his influence on skateboard filmmaking and the industry at large.

“There’s a huge difference between seeing a movie on your TV or computer screen and seeing it on a big screen in a movie theater”, said Academy member and director Greg Hunt, after spending a few hours at the Downtown Independent Theater watching the top nominated films at last year’s Festival. Hunt couldn’t have put it better, because it doesn’t matter how good a movie is, it doesn’t reach its full potential until you see it on the biggest screen possible.

The films that the Academy will nominate this year deserve to reach that potential. The ISFF committee and our partners selected two screening venues for the 2011 International Skateboard Film Festival: Downtown Independent Theater for Los Angeles and Long Beach Art Theater for err.. Long Beach. By adding the Long Beach Art Theater as a venue, the Festival will be able to reach a “south of L.A.” audience that wants to see the movies on a big screen while avoiding the traffic difficulties.

BEST DOCUMENTARY: “In Search of the Miraculous” by Pontus Alv

BEST DIRECTOR: Pontus Alv for “In Search of the Miraculous”

BEST SOUNDTRACK: “In Search of the Miraculous” by Pontus Alv 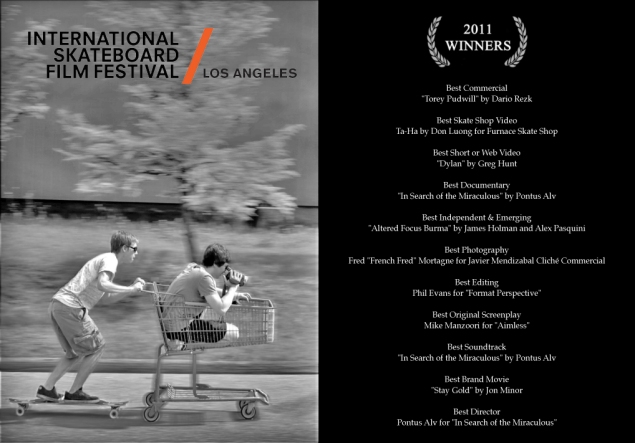