When we told Russell Houghten: “Anything as long as it’s skateboarding”, we didn’t know he was going to dig so deep into skateboard video culture. The fist one to name the video, we’ll send him (or her) a gift.

When it comes to seeing the world in a completely different manner, our friends from the Empire of the Rising Sun never fail. Takahiro Morita, one of the 10 handpicked filmmaker of the ISFF+GoPro Challenge came up with a special twist to our first rule: “Anything as long as it’s related to skateboarding.” Check what his GoPro Hero3 camera did… to him!

After last week breaking news, we are back into the thick of things with the trailers for the ISFF+GoPro Filmmaker Challenge.

Check what he can do with a GoPro Hero3!

The ISFF + GoPro is well under way.

Equipped with their two Hero3 Black Edition cameras plus all the accessories, the 10 handpicked filmmakers have been turning in their first trailer and the variety and creativity is crazier than expected. This week, New Zealander and winner of the Best Independent & Emerging Filmmaker in 2011, James Holman is taking us to the land of “Scallywags”…

We’ll be posting one trailer per week until the Festival’s Award Ceremony.
Keep your eyes open for what’s coming!

The ISFF + GoPro Filmmaker Challenge is on! 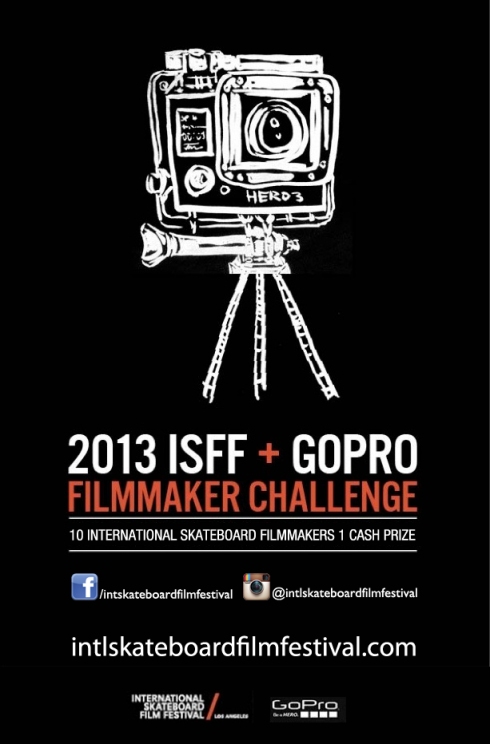 We are really excited to partner with GoPro and to launch of the first ever ISFF + GoPro Filmmaker Challenge 2013.

The Challenge consists in creating a short film (three to eight minutes in length) on any subject related to skateboarding, exclusively shot and edited with the GoPro HERO3 Black Edition.

The ISFF committee handpicked a panel of ten filmmakers from around the world, including past ISFF winners and world-class skate videographers to compete in the Challenge.

A panel of judges from the Academy of Skateboard Filmmakers, along with a few invited guest judges, will select the winner based on originality, execution, editing, and complete usage of the GoPro HERO3 Black Edition. Three winners will be recognized and awarded at the ISFF Awards Ceremony in November in Los Angeles. Winners will receive a cash prize of $3,000, $2,000 and $1,000 for first, second and third place, respectively.

All films will be hosted exclusively here, on the International Skateboard Film Festival Website as well as the GoPro Network (http://gopro.com/news/).

From his early work documenting the rise of the Z-Boys to his latest contribution in Bone Brigade: An Autobiography  or a Nike Skateboarding ad campaign without overlooking is very own short movie Fin, Craig is, without a doubt an historian, photographer, artist and writer. 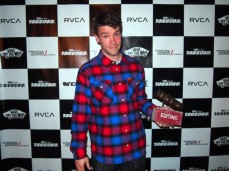 Phil discovered skateboarding in his small Irish town and developed an inexplicable compulsion to produce a near-endless stream of skateboarding videos and images. Format Perspective (2011), filmed completely in Super 8, showcased the insight and different approaches used by these six european photographers. 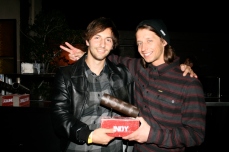 James’ latest film, Altered Focus: Burma won the ISFF Best independent & Emerging award in 2011. The plot was «easy»: to follow three young film makers and skateboarders as they travel through Burma. In a recent email, James teased the ISFF Staff with «I have a banging plan». We can only expect the best. 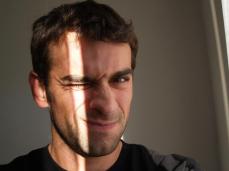 Sebastien describes himself as a «motion designer» from Biarritz, France. Feedback to the Future, one of his latest productions, was nominated for the 2012 edition of the Festival. In this 4 min. short movie he goes through a short time travel venture, recollecting souvenirs of his history as a filmer/filmmaker.

Dan grew up in Westchester, PA  then moved to Philadelphia,PA in 1995, filmed the extraordinary Eastern Exposure 3. He then got a job offer from Element Skateboards but didn’t like Orange County so he moved to San Francisco. Ended up working for Deluxe where he has been working with (except for a short stint at Ipath) since. You just can’t go wrong with that. 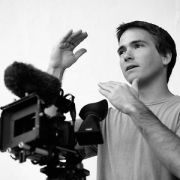 Incredible technician, Russell masters light, camera shutter, and filters like no other. Check out “Filter”, his part in “cinematographer” and the last Dylan Rieder commercial for Gravis. Filter, starring Dylan Rieder and Sammy Winter, recently won for Best Photography at ISFF 2012.

Currently based in Skate City, USA, Ryan is one of those quiet connoisseurs of good skateboarding. Relatively new to the game, he has an irreproachable technique and a sense for completion that is always pleasing. He has just finished DVS Does Detroit… Sounds like a promise in itself.

Skate journalist for the past 13 years and part of the original Tokyo «Z-Boys», Takahiro is the visionary behind the underground cult film, Overground Broadcasting (2008). He excels at integrating the Japanese and the western skateboard culture into a special blend opened to the world.

As soon as Josh’s name is dropped, the first image that comes to mind is Static, then Static II and Static III…  Adio’s One Step Beyond too. And if you have watch these masterpieces of skateboarding videography, you probably still have some chills remembering the crisp images and incredible angles.

Skateboarder since the late 80s, Elard started his own production company working on skateboard and non-skateboard audiovisual projects in Lima, Peru. His sense of editing as well as his eye for details and his knack for original scenarios unveil the true magic of South America that shall speak with a couple Hero3 cameras in his hands.

GoPro makes the world’s most versatile cameras, enabling people to capture immersive and engaging footage of themselves during their favorite activities. GoPro’s HERO line of wearable and gear mountable cameras are used collectively by more consumers, professional athletes, and video production professionals than any other camera in the world. Based in San Mateo, California, GoPro’s products are available in more than 30,000 stores in over 100 countries worldwide and direct via GoPro.com.